Is This The End?? 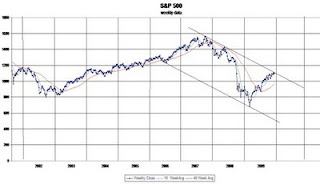 Dollar gains limited asset gains today as the SP fails against strong resistance. Declines in foreign currencies and gold were supported by continued global economic weakness. This again sent the pack running for the safety of the dollar and Treasuries, which rallied today.

The SP weekly chart above shows pretty heavy resistance at current levels. We looked at this last week and compared the SP with interest rates, noting the correlations. If the charts mean anything, this could be the time when equities and rates begin to fall precipitously. Despite the claims by the government that we are now on an uptick, the truth is that much of the gains, especially in the financial sector, has been engineered by the government. Federal Reserve Chairman Bernanke commented yesterday that interest rates will remain at current low levels indefinitely. This totally snuffed out any breakout efforts for interest rates.

As I mentioned many times, the government cannot, will not allow interest rates to rise if they can help it. A sudden surge in interest rates, although inevitable, will most likely doom the US economy. They are totally out of tools here.

I can only laugh as President Obama today stated that we must spend our way to prosperity. OMG! Can he mean it? I had always had a somewhat open-minded point of view and many have even called me liberal. But I never totally believed that Democrats were totally "TAX AND SPEND." Well, my best experience was Bill Clinton under whose tenure I had the most prosperity in my life. I even worked at the government during his tenure and was happy to see the ranks of government workers and federal deficits melt away. But now I know what "TAX AND SPEND" really means. I never, in my wildest dreams, ever expected that this is what the Democrats were all about. Spend spend spend.

I am finding it difficult to hire workers. When I contacted my Congressman about what I can do when people prefer to take unemployment rather than accept a job, I have gotten no response, despite several attempts to contact him. Ummmmm, surely I digress.

Well, it's beyond me how a socialist state can see a 30% stock market gain. What do the experts see that I don't? I've been a bit fearful of the markets since 2005 and my attitude is no different. 0% interest rates going on indefinitely can only have one end effect, another market meltdown. I see that things never happen in the time frame that you expect. I am so thankful for the invention of 2x and 3x short ETFs. It's impossible to be short, difficult to buy puts and certainly, the futures are too short termed to play this concept out for the long term. Despite some of the hard knocks the ultra short ETFs have recently received, I continue to add on. Eventually, everthing is going to collapse. My only concern is that when it does, will the dollars that I win be worth anything.