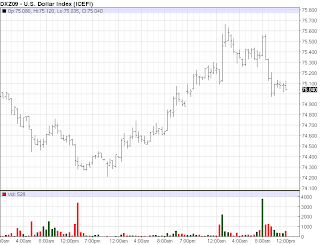 "What can they be thinking?' I keep asking myself as the Federal Reserve and US Treasury Department vow that they have a strong dollar policy. Even as the US Dollar continues to collapse, no doubt due to current monetary policies, our money leaders assure us that they are supportive of the strong dollar. Even as Japan and other countries shiver as the dollar reaches new lows and they vow to begin buying dollars, our leaders tell us one thing but enact policies that clearly show that they are shooting for different results.

This is not the time or place to discuss political issues so in defense of our leaders, I can only surmise that they truly understand the global financial situation AND KNOW, the in the event of a financial meltdown, the world will flock to the US Dollar in search of safety. Such is what happened this morning as news of a possible Dubai meltdown spread through the markets. Gold was down some $40 early, the Euro dropped significantly and the dollar rallied above the 75 level. As the dollar rallied, markets collapsed but then the attitude changed. Still enjoying my holiday, I paid scant attention to the talking heads commenting how a Dubai meltdown might actually be good for the US economy. Well, again, I sure didn't catch the jist of this comment but in the end, the dollar again began drifing down and markets recovered.

And now I ask, what happens if the dollar isn't the safe haven that it once was. What happens if foreign government and institutional investors refuse to buy into negative interest rates? Will the US really ever pay back all of the debt they are accumulating? What happens to the US Dollar and the economy if we have yet another banking system meltdown (a sure thing in my mind) and yet the dollar remains weak? Arggghhh! The US will have to devalue, default on debt payments much like our neighbors in the Gulf, interest rates will soar, fiat currencies will become worthless.

WHERE CAN YOU PUT YOUR MONEY????

I tend to agree that we are in the down part of the K-Wave or long term cycle and that all forms of assets will devalue. With this in mind, the concensus is that the safety of the dollar is the place to be. But look at the hourly chart of the dollar today. In the end, the dollar gave up the rally and headed back down.

This hedge fund, featuring Nobel Prize winning economists as model developers amassed billions in investments. The assumptions that they built in appeared to be flawless UNTIL!!!! In the end, economic assumptions are just that. Assumptions that will change over time and sometimes in a heartbeat, without warning. Yet the Federal Reserve and Treasury continue to act apparently with total confidence that their assumptions will hold true into the future. We can print as much money as we wish and borrow as much as we wish and the world will continue to beat a path to our doorsteps. The Government and Federal Reserve has made investments that no rational person would undertake. Has it been a blatant give-a-way? Are politicians and theoretical people so niave?

In my mind, the best bet for individuals is to act just like the government. They know that all of the debt they amass now will eventually be worthless. Either they have no intention of ever paying it back or if they do, it will be in dramatically deflated dollars. Consult with your adviser to see if such a strategy makes sense for you. If you have nothing to lose these days, take it to the limits. As deflation pervades the economy, all of your assets will deflate in value. If all you have is debt, then that will also deflate. What do you think? Not the conventional line of thinking...but what is the government thinking? Shouldn't our leaders be setting the example??? Perhaps they are.