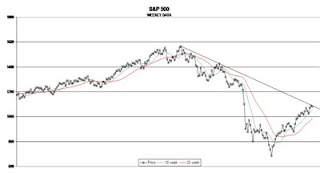 The S&P 500 index failed to break through a key resistance level for the second week in a row suggesting that the highs for the year may be in. The SP index briefly broke through 1,100 on Wednesday but fell back to close the week just below 1.080. Holding above the 1,100 level would surely have brought in a brand new buying surge. This still may be seen next week as GDP data will be released. However, the treasury will auction off still another $130+ billion in government debt. Up to this point, most auctions have met with strong demand, especially in the shorter maturities.

Dr. Christina Romer, testifying before the Joint Economic Committee said that we have already seen the most we can expect out of the stimulus package. Despite other administration officials who stated recently that only 40% of the money has been used and that the additional 60% will be stimulating the economy well into 2010, Romer, stated that unemployment will remain high next year.

The assumption that there was still 60% more of the stimulus money available to pump into the economy was certainly an impetus to rising stock prices. While earnings have been better than expected for many companies, the economy continues to teeter, especially in the banking sector.

More than 100 banks have failed thus far in 2009 and many others are feared to be on life support. While the FDIC has remained mum about the state of their bank book, many believe that the organization that guarantees your bank savings is also on the verge of collapse. The FDIC however has a line of credit for $500 billion to cover excessive losses. No worry, the taxpayer can handle it.