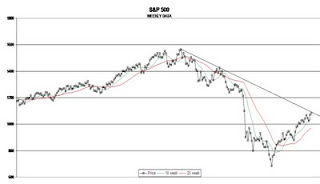 The market has moved "ALL THE WAY" back to the last bastion of resistance. What a run we've had. I don't believe it. I never believed it. It's only proven that once again, there is no reality in the market. How I wish that the move in the market really reflected, at least, my vision of economic realities. Intrinsic problems with the economy continue, only now, the US Government has gone "all in" on the play, trying to fend off eventual collapse. Only now, when the banks finally do collapse, it's going to take the government with it.

But as I have seen in the past, irrational behavior can go on much longer than anyone can either stay in business having a realistic understanding of things, or stay solvent. Isn't this the way it always is? You could be right in a law suit, but if your opponent has more money than you, your opponent will always win as legal costs will eventually wipe you out. Does't seem to be any different in the market. You could be fundamentally right, but you can never fight the trend, especially if the trend is being engineered by the Federal Reserve and the US Government.

But as we have seen in bubbles past, they ALWAYS collapse. Nothing based on fiction can stand on its own. The true problem is that the banks and funds play so loosely with our money. Heads they win, tails they win. Big bonuses continue at the banks. Yes, they collapsed the system and got bailed out. Now the system gets inflated and they take huge bonuses. There is no better job in the world than being a banker.

I expect to be buying some more SDS and DXD today. This is the last level of resistance in my book. Should the market break through and hold, there is no reason not to believe that the markets will surge to new highs. There is no reality in the market. If the Fed has tripled its balance sheet and so much money is in play, why can we not expect asset values to also triple? While there is no inflation according to official sources, a tripling of the Fed's balance sheet and injection of so many dollars has to have some significance. As the Fed has stated that they will not raise interest rates in the near future nor drain reserves, perhaps playing to market to go down is folly. The powers that be want us all to be "ALL IN" but in the end, things will collapse and we will all be penniless, at the mercy of the banks.