Can't Keep This Market Down 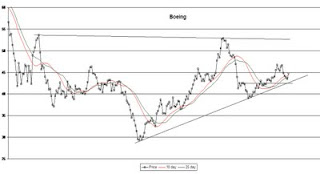 Miscellaneous news pushed the market higher today. Boeing also popped more than a dollar and our September calls are now up more than 10%. I had been hoping to see the 42.5 level to buy a few more, after all, premiums are low and the potential volatility it extremely high.

One of the reasons I have been focusing on Boeing as of late, well, it's an interesting trade. At this point in the year, we are just having fun and looking for big hits. We got our 15% gain for the year and we are squirreling it away, not risking it much.

As those of you who follow me know, I always look for these three period tests as pretty solid profit opportunities. Next week, Boeing SHOULD attempt to test the recent highs, and should it bust through, it's a good play for the mid 50s as we continue to move within the pennant formation. No definitive breakout here in the offing but a move to the mid 50s makes our Sep 45 calls highly profitable. Should we fail, the long-term puts are in place.

There is no keeping this market down so you must keep a short-term long position in place. Bad banks are cooking. Not long ago, I told a client, heavily invested in Citi, that it was looking good. Don't know if he will ever make money on it but it certainly looks like a great play now.

I mentioned that I even bought some BAC but when it approached 17.5 and I was up some 15%, I sold the 17.5 calls. I'm a chicken on the long side of this market but try to strategically play it.

There is overhead resistance for sure and the downtrend will probably remain intact over time.

There is no doubt that this probably is the greatest upside run in history indicating that the downside could have been highly exagerated. But I don't think so. Over and over again, the Fed has tried to avoid the system cleansing that a real Bear Market can provide. They are certainly running out of tools and they are "all in" on the bad banks.

I don't know it all and I can't even guess. But the things that I have read make me very uneasy about betting my life savings in this market. The thing that probably troubles me most ( and that I have read about the least ) is that the FASB wanted to force corporations to post all of their off-shore entities on their books. I had been a high-end estate planner and know how off-shore entity tricks work. It could be that the banks have their riskiest plays in entities off-shore and are not disclosing them to investors. This totally sucks. How can you buy a corporation when risk is undisclosed. How can you even play in a system where the rules allow corporations to hide their smelliest shit in entities offshore and not reveal it in their financial statements.

It's no surprise that when the crap hit the fan last year, CEOs said that they had no idea about the amount of problems they have. It reminds me a lot of the movie Independence Day. When the president forcefully denies that there is no Area 51, his adviser states that this is not totally correct. Even the president hadn't been told about it because of, how did they put it? Plausible deniability, or something like that.

I thought that after ENRON, there had to be full disclosure and jail time for inaccurate accounting statements. Come on people, we are all being hoodwinked!!!! This is all a game to get you to put your money in the game. If you are not hedging yourself on the downside, you are going to be sorely disappointed when the last pennies you have disappear.

So I am playing the game and participating in the profits to the upside. But I never hesitate on huge moves up to add to my SDS and DXD positions. These are the Ultra Short market positions that skyrocketed to the moon when the market fell at the end of last year. Check them out on BigCharts or other free charting software. I am out of TBT in my personal accounts but keep a small position in managed accounts for the long term.

There is no way that we can have a strong economy and the TBT or short 20 year + bond position declines like a stone dropped out of an airplane. It's just the trillions of dollars that got pushed into circulation. No one holds cash at 0%. Big money doesn't anyway.

Enough of my rant for today. BA is as good as any to play for a big move either up or down in this market. If you have some stocks that you would like me to look at, COMMENT on this stuff. I'll look at whatever my audience likes. Perhaps you have some better ideas than me. I'm just making money.....