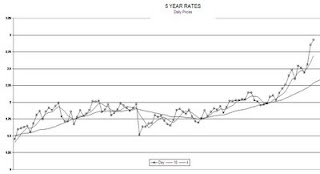 Shorter-termed interest rates continued to surge yesterday, with the 5-year rate nearly doubling since the Fed announced it would aggressively buy Treasuries in an effort to keep rates low. As many had warned from the beginning, the Treasury market was turning into the next bubble. Really, there is no place to hide. While the powers that be continue to print more and more dollar bills, these dollars are not going out to businesses who need them to grow and flourish, it all goes to the "casino," the stock, bond, and other markets.

Many had gravitated to the shorter-termed maturities to avoid the high risk that the longer-dated treasuries inherently carry. Shorter maturities are traditionally less volatile. But not the case today. 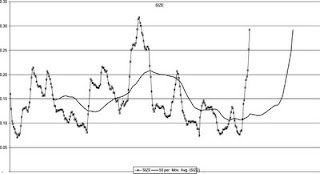 In fact, the 5-Year rate now carries a daily volatility level of 7% compared to just 2% for the normally more volatile 30-year rate

What About Housing?? Where is the Fed?

Despite the Fed's assertion that it would aggressively be buying treasuries to keep rates down, rates have been soaring since their announcement! The government stressed that recovery would occur if we could keep rates low, allow people to continue refinancing their mortgages at lower rates, enable home purchasers to acquire cheap mortgages, etc. Everything was based on the housing recovery. The optimists claim that rates are still low even though they have backed up more than a full percentage point in the last month. Where is the Fed? Are they all talk?

In an article posted on the On-Line Journal,Monetizing Debt Not the Answer, the tactic of monetizing debt does not seem to be the way to go and in the past, this tactic had been rejected. Could it be that the great student of markets past, Bernanke, has reassessed aggressive treasury buying?

If lower interest rates were in fact the key to success, and rates are much higher now? Can we still expect the stock market to continue to remain so high? Seems to me that despite all of the bullish talk that continues to fill the airwaves and press, I believe that we will retest the market lows and continue even lower. When it will happen? Who knows. In 2005 I predicted that the market would fall to 6,500. And while my prediction was correct, it took nearly four years to come to pass. As they say, the markets can continue to remain irrational much longer than I can remain solvent. As I result, I'm slightly bearish in my core stock position with some SP call option shorts and DXD Ultra Short Dow positions to complement a holding of "In-The-Money" buy/write positions.