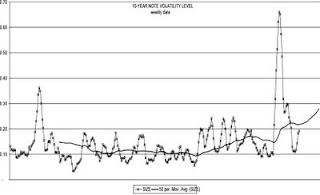 Despite the recent rate decline, when we look at the weekly Volatility Chart (Size, we see that Size is Rising and a primary trading rule is that when Size Rises, Stay with the Trend. If we take a read of where the average size price comes in, we see it's around.25. At average size levels, a +2 standard deviation move from the trend line would put us at the 3.5% level. 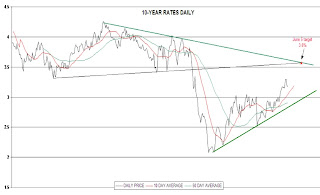 Looking at the daily chart, we appear to be right in the middle of a large pennant. The weekly chart we posted earlier today showed the potential for an up move, bouncing off of the four week average. There is heavy overhead resistance illustrated in both charts.

Already, many analysts are worrying about the surge in oil prices. I've seen gas prices surge from 2.20 to 2.65 within a week!. Some say that already the recession is about over and so there is increasing demand. Others say that oil is way overbought and that there is no reason for it going so high.

Oil Prices on the Move! 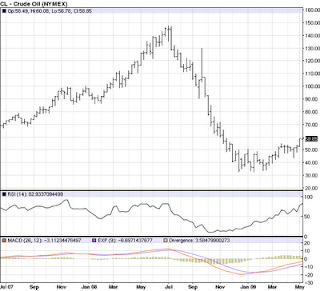 The weekly oil chart looks pretty bullish to me. I don't see resistance on this chart for a long way to come. We have been bullish on oil from the beginning of the year as we believed that trashing of the dollar would be best played by investing in oil gold and other tangible assets. 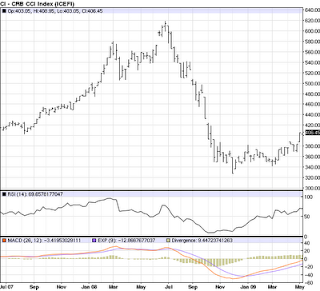 It's not just oil. Look at the CRB index. It also is going up. For Fed Chairman Bernanke to say that deflation pressures are easing but we still need to worry about them, he's certainly looking at something different. But we all know that there is nothing that the Fed wants more than inflation. Very soon they will get their wish. MAKE SURE YOU ARE PREPARED!