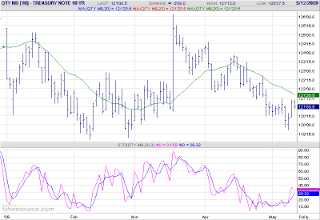 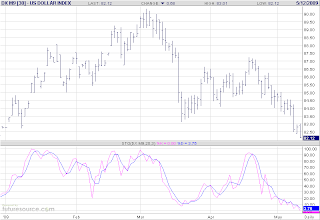 After an ovesold rebound yesterday (accompanied by a Wall Street selloff), 10 year notes appear to be resuming their current downtrend. The 20-day average appears to be providing current resistance. The dollar continues under pressure as well.

More and more analysts are starting to state that the stock market is overvalued already while others claim that we are in a new Bull Market!

Take a quick look at Rep Grayson's You Tube video about Federal Reserve oversight. Truly scary. I took the time to look at other Rep Grayson's YouTube offerings and was pleased to see one of our elected officials who realizes that we are being robbed! If you get a chance, look at his video where he questions Citi boss Pandit over the US taking 90% of the risk of Citi's bad debt. Pandit says that he bought "insurance" from the government. Despite the mess Citi got itself into, I believe that Pandit still made $100 million last year. Well, he got the US government to take 90% of his losses, I guess that's worth something.
Labels: Asset Design Center, bonds, citigroup, Gary Lewis, Stock Market, US Dollar