Ten year treasury yields rallied sharply last week despite less than favorable economic news. Unemployment numbers continue to rise and other data points continue to be negative. But despite poor economics, both the stock market and interest rates rose.

As mentioned last week, we were short both calls and puts on the futures. The rise in rates caused the future to drop sharply, making our May 126 strike calls virtually worthless. The positions were closed out winning nice profits.

The chart above shows the weekly interest ten year rate while the chart below shows the June ten year note futures contract. In examining the charts, notice how we may be setting up for a decline in rates and a rally in the futures. You can see that in the rate chart, the moving average is still declining pretty quickly. While rates advanced above the trend line, I would say that it's still too soon to play rates to go up. But the picture may change next week. 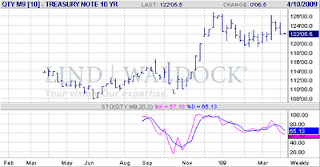 Looking at the futures chart, you can see the three-period pattern developing here. I would expect note prices to rally and try to take out the highs of three weeks ago. And, perhaps the rally will break through the double top and accelerate to still higher highs.
With this in mind, I purchased May 125 calls near the close of the day on Friday. I am also short puts so the position is very bullish. Should we fail to take out the previous highs or if we don't close above the closing price three weeks ago, I'll probably be reversing my position, expecting a big drop in notes.
On the positive side, as I mentioned in earlier blogs, it seems that interest rates and the stock market are starting to be correlated. If this correlation should hold true, expect the stock market to fall some this week. But this might be the last chance we have to get on a move that could take the market substantially higher.
Labels: Asset Design Center, bonds, Gary Lewis, investment, notes, Stock Market, Trendsetter