US Dollar Tumbles More Than 1% 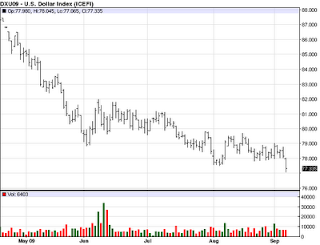 The dollar tumbled today, breaking through support and setting lows that hadn't been seen in nearly a year. In just four months, the value of the dollar has declined by some 12%. In the end, this is going to really hurt the US consumer as virtually no toys (i.e., electronics) are manufactured in the US.

I see it each time I travel to Mexico. While food is relatively inexpensive, if you want to buy a computer or a tv or even a coffee maker, get ready to pay through the nose. The simple things that we take for granted to be cheap are going to get so expensive that I will have to go to Mexico to purchase them. We would be much better off earning pesos now than dollars!

If you think that that comment was humorous, just take a look at a chart of the Mexican peso. While the US Dollar has been eroding and falling from higher levels, the peso has been moving upwards and holding value.

The Canadian dollar looks even better and soon may be worth more than the US Dollar!

That is, to preserve the value of the US Dollar! I can't get over how so many praise Ben Bernanke on what a wonderful job he has done getting us out of the fix that his organzation helped put us in. But if you take a look at our currency, he is not doing his most important job! It is one of the biggest reasons that the Federal Reserve has to have some controls over it. Our dollar has become virtually worthless over the years. This is even though the government asserts that there has been no inflation. There is truly cause for concern. Many want to give the Fed even more power, more control but the Fed is taking us down the path of distruction.

WHAT THE FRINGE IS SAYING

I'm definitely a "fringe" fan. I have no hope nor trust in the US Government any longer and am truly fearful for our future. There does not appear to be any respect for our Constitution, our systems of checks and balances or the rule of law. It's not just the current administration either. Both parties have been doing as they please without having to be held accountable.

Anyway, some advocates of gold are saying that the only way the US will ever get out of the overwhelming debt they are amassing is by moving to a new one world currency. Hey, even the UN was calling for this yesterday. What does it mean? It means that you will be able to swap your worthless US greenbacks for whatever new currency they come up with. Unfortunately, you will only get pennies for your dollar. What does this mean for debt? Debt also will be worthless and debt holders, such as holders of long term US Government Bonds, are going to be severely hurt. Severely!!

The government can and possibly will do it. Look at how they handled the auto companies. And hardly anyone complained! We are getting so used to "?$%# #*%*$$#" or however you want to call it. We are like sheep being led to slaughter. Will no one speak up? Or will we be called traitors or un-Patriotic for trying to defend our rights. Can you imagine that those who sued trying to get as much value for their secured debt were called un-Patriotic? And the public agreed! OMG!!!

WE ARE DOING IT ALL WRONG!!!

Another story crossed today was that Consumer Credit Fell by Record Amounts! Just think of what I said, what is the government doing? They are amassing as much debt as possible, or so it seems. Could be that they are planning only on paying back pennies on the dollar! Why aren't we doing the same thing? Fringe idea??

Yes, what about it? Everyone these days is stressing that you should have at least 5% of your portfolio in gold. And for a long time, I was a strong advocate of it and preferred to have gold shares instead of international stock positions. But now I'm really afraid to advise holding gold or gold shares. Do you know why? Can you guess?

Don't listen to me, click the title and go to the Wikipedia article discussing Roosevelt's 1933 decree making it illegal to hold gold or gold certificates. The government set the price that they would pay and if you didn't obey, you could get fined $10,000 or spend 10 years in prison. Ummm, kind of makes me think about how your IRA account works. You do all of the work making the money, then when you retire, the government taxes the hell out of you when you take your distributions!. And God forbid that you don't take your mandatory distributions. There is a 50% penalty! Oh how harsh.

OUR LEADERS SHOULD SET THE EXAMPLE

Just as youngsters look up to the athletes as role models. We should all look up to our government and our elected officials as role models in our life. What could that possibly mean?? I'll leave that open to your imagination. :->

Go nuts. If I'm right, he has has the most debt when the stuff hits the fan wins!!!