North Korea continues to "rattle the sabers." Iran continues to remain under the control of someone intent on destroying others. The nuclear threat is abundant yet no one appears to be taking action.

While I never condoned President Bush's invasion of Iraq, the UN and other countries show that they don't have the will to be strong against real threats. Why are we letting others "catch up" in military might? Well, as this blog tries to keep political comments focused on the Fed and wasteful US government spending, as I look forward onto the investment horizon, I have to believe that aggressive actions by other countries that hate the US are possible. And such actions would most likely cause additional "uncertainty" in our markets causing possible sell-offs in the stock markets and the familiary flight to quality sought in US government securities.

We all know that interest rates are headed higher. It is now a common belief but yet as the 10-year note hit 4% on Thursday, it immediately backed off. At the time it was testing 4%, I wrote how SIZE WAS REVERSING! How could that be? Rates continued to rise but yet real volatility was RUNNING OUT OF GAS. And no sooner did I mention it then interest rates declined in a dramatic fashion.

What to Watch For

Look for rates to rally again to the 4% level on Monday. This would be the three-day test of the high. I don't expect rates to follow through on the upside. In fact, all the while that rates rose sharply through the pennant that I had been discussing for a month, I was aware of one phenomenom that I have seen many times in my trading experience. 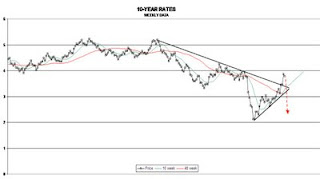 Look for rates to do an "about face" and drop like a rock. It will be much more than a short shake out. It will be real fear driving rates down hard.

I don't know the news and I am not a psychic. I only know that I have seen this happen so many times in my career. Volatility shrinks as the pennant narrows. There is a breakout pushing prices to abnormal levels, but then a dramatic reversal ensues.

It Pays to Be Aware

Be sure that you heed this advice. It's not that I'm saying that this will definitely happen. I am still holding my long TBT position in the core portfolio and I am not going to give it up no matter what because it is a small percentage of the portfolio. I still believe that the interest rate picture should continue to be gloomy for years to come. Every month now, we are going to be focused on the Treasury auctions. Volatility will increase as we head into this action. The number is a new one but the game is the same. There is always some headline number the market focuses on. I like to occasionally bring back the CRB Index on the site because it used to be a major market mover. There is always something.

But if you are a futures trader or have a disporportionate amount of risk in bonds or notes, you must be aware of the risks that appear to be imminent. Do you think that North Korea would not fire a nuclear weapon at someone? Have they shown anything but irrationality in the face of overwhelming forces? Is China backing them up?

What about Iran. Do you think that they would not do something irrational given the chance?

And are leaders. More sanctions, more resolutions, more talk. No action. Again, I don't advocate anything here other than know your financial risk. The flight to quality happens often. When it does, the market moves can be huge. Practice prudence. Take your profits and pick your spots for trading. You don't have to be in it every day.