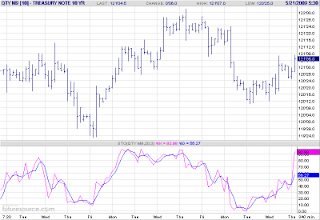 Interest rate futures rose slightly this morning in anticipation of this week's jobless claims number. While analysts are expecting the number to be around 600,000 losses, better than last week's 637,000 number, rates none-the-less declined. From our chart analysis last night, it appeared that rates could rise today. The Conference Board's report on Leading Economic Indicators comes out later this morning. This number as well is expected to strengthen. If all the economic news is positive, then why are rates falling?

The news still appears to be a mixed bag. Our old friend, Mr. Greenspan, has weighed in with his opinions on banks. Of course, he's not in charge any longer so now he is a doubter. Of course he is. He is still stunned in discovering that banks would actually act in their own best interests instead of those of the shareholders. I for one am certainly not surprised to see how Mr. Greenspan could have been fooled. If you had ever listed to Mr. Greenspan's testimonies to the congress, you might agree that he never really said anything nor did congress ever ask him anything. His testimonies were so vague that actual college courses developed in Greenspan-ese!

On top of worrysome comments by Mr. Greenspan, other comments emminated from the mouths of others running the show. Mr. Geitner expressed less than total confidence that the economy was really improving and the release of the Federal Reserve meeting minutes for April also caused many to worry. It appears that GM's financing arm will need an extra $7 billion or so to get by. The US Government will be direct owners now of Chrysler and GM. For sure, my next car will be a Ford. Talk about unfair competition. I am always for the underdog.

I, along with many others, are expecting that the markets will begin to break down very soon. I will be doing an in-depth analysis of the 100 industries that I cover and will have some timely ideas for subscribers.